(DOVER, DELAWARE) May 15, 2017 – When Delaware’s soybean farmers began planting this spring, they did so with the environment in mind. 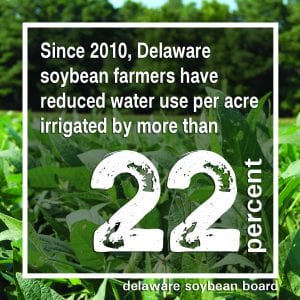 That’s a 25 percent increase in bushels produced and on fewer acres. And they’ve done so while reducing their impact on the environment. Since 2010, they’ve:

“A high-quality and high-yielding soybean harvest and a healthy environment are not mutually exclusive. At the center of them is a sustainable farm,” says Jay Baxter, Chairman of the Delaware Soybean Board and soybean farmer from Georgetown, Del. “We work hard to produce soybeans more efficiently each year, while reducing our impact on the environment, all with our neighbors and future generations in mind.”

The statistics were compiled by the United Soybean Board’s Sustainability program using data collected by the U.S. Environmental Protection Agency and U.S. Fish & Wildlife Service, among other sources.

Soybeans produced in Delaware provide food, feed, and products you probably use every day that you might not realize. Those include healthier soybean oils for salad dressing and deep frying, new more sustainable plastics and printing inks, and even and feed for the poultry and livestock industry.

The Delaware Soybean Board consists of nine farmer-directors and the Secretary of Agriculture. Funded through a one-half of one percent assessment on the net market value of soybeans at their first point of sale, the checkoff works with partners in the value chain to identify and capture opportunities that increase farmer profit potential. One-half of the soybean checkoff assessments collected by the state boards are forwarded to the United Soybean Board.