What’s going on with my soybeans? 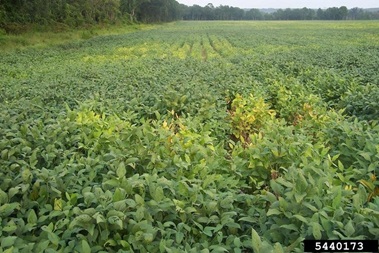 Has your field of green changed colors? Time to investigate.

Farmers can choose their soybean variety, row spacing, or fertilizer applications, but controlling plant diseases is more difficult. Soybean diseases are caused by living organisms which feed on the plant, but they rely on ideal conditions to thrive. These infectious organisms can be either bacteria, fungi, viruses, or nematodes, and may be present at the same time. While temperature and moisture may control their growth cycle, any stresses on soybean growth also increases their ability to infect the plant.

Disease can be foliar (on the leaves), stems or roots. Fungi can cause symptoms in several locations including leaf spots, root/stem rots, and seedling blights. Bacteria can cause leaf spots, water soaking or soft rots. Mosaic leaf patterns are a common virus symptom, while nematodes feed on roots in the soil, causing a general decline in appearance and drop in yield.

Identifying and managing diseases in soybeans requires a knowledge of the environmental conditions that promote disease development, as well as the actual symptoms. Properly identifying diseases can involve several factors:

Since some diseases are specific to soybeans, residue from previous rotations can indicate future infection. Soil type may decrease water infiltration, increasing surface ponding, while sandy soils can favor nematodes. A knowledge of the general symptoms from nutrient deficiencies will also help eliminate fertility as a cause of soybean discolorations.

A broad list of Mid-Atlantic soybean diseases is available from Virginia Tech.

“Soybean cyst was ranked as a yield limiting factor in Delaware and requires specific management,” said Kleczewski. “Symptoms from SCN may not be obvious, besides lower yielding fields, until populations get higher.” 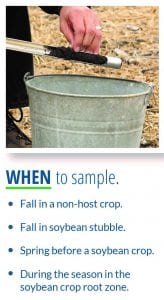 As SCN populations are becoming increasingly aggressive, growers are encouraged to actively manage SCN. That starts by testing your fields for SCN so you understand the severity of the problem. The higher your numbers, the greater your chances of yield loss, and the higher that yield loss will likely be.

“It’s important for farmers to understand that they’re never going to get rid of SCN once they find it in their fields. But it’s not a death sentence. It’s similar to finding out you have high blood pressure – you learn to manage it as a chronic health problem,” says Greg Tylka, Ph.D., nematologist. Tylka is a member of the SCN Coalition – a diverse group of University researchers, Extension specialists and ag company representatives who are concerned about the evolving threat from soybean cyst nematode.

Yield reduction and visual symptoms are caused by SCN feeding on roots in the soil. Rotating out of their host crop and into corn is helpful in reducing SCN numbers, but eggs can survive for several years. Any field with major damage should consider long term rotations out of soybeans. Often, SCN moves with soil particles, so minimizing tillage and movement of contaminated soil to new fields should be practiced.

To identify SCN, dig up roots and look for lemon shaped, white cysts. Be careful in sandy loams not to confuse them with angular sand grains. If SCN is suspected, contact your County Extension Educator, or submit a soil sample to a diagnostic lab.

To read more on SCN, visit the SCN Coalition or see the University of Delaware Fact Sheet.