Don’t Get Caught with Your Plants Down! 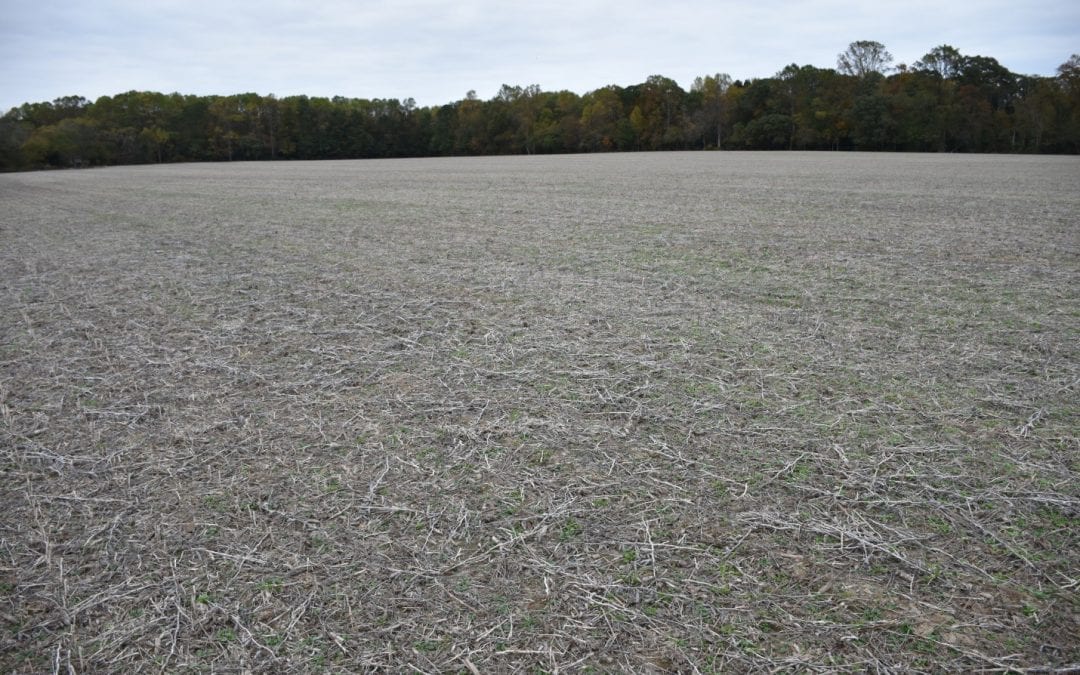 Did your field look like this? If so, your field may have been infested with Dectes stem borers. 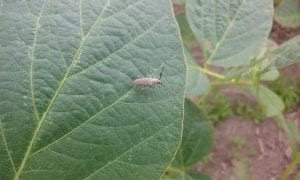 The Dectes stem borer adult is a long horned beetle, approximately 3/8-1/2” in length, grey, with long antennae that are banded black and grey. Adult beetles begin emerging in late June and are present in soybean fields until mid-August. Female beetles lay a single egg into the pith tissue of a soybean plant by chewing a hole into the plant’s epidermis and inserting her ovipositor into the plant. 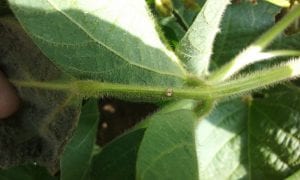 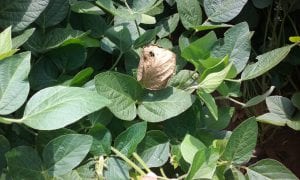 Once in the main stem of the plant, the larva will continue traveling up and down the inside of the soybean plant, feeding on the pith tissue. Once the plant begins to senesce, as early as late September, the larva will create a chamber to overwinter in by girdling the inside of the soybean stem several inches above the soil surface and depositing a frass plug immediately below the girdled area of the stem. Dectes stem borers overwinter as larvae, pupate in early summer and adults begin emerging in late-June, completing the life cycle. 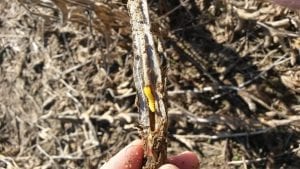 Photo5: Dectes stem borer larva in the “overwintering chamber” it created inside the soybean stem.

The overwintering behavior of Dectes stem borer larvae makes plants prone to lodging. Under heavy infestations and when harvest is delayed, lodging losses can be as much as 15 bushels per acre. Physiological losses due to the tunneling activity of the larvae during the growing season has been difficult to document but research has suggested that losses could be as high as seven percent. 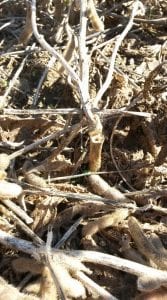 Photo6: Lodged Plant due to the overwintering habit of Dectes stem borer larvae

To confirm that a plant is infested with a Dectes stem borer larva and to determine the risk for lodging losses, cut the plant lengthwise with a knife, looking for larva and or feeding damage. This can be done as early as mid-September. Knowing if a field is infested with Dectes stem borers and the severity of the infestation is important because lodging losses can be minimized by timely harvest. 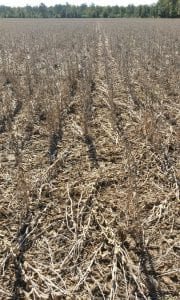 Some cultural control practices that can reduce the risk of yield loss from Dectes stem borer include:

Having little success reducing lodging losses with insecticides, we decided that instead of trying to manage the insect pest, maybe a better approach would be to see if we could change the way we manage our soybean plants to reduce lodging losses from Dectes stem borers. In 2017, we conducted research to investigate the role plant populations can play in increasing stem diameter (strength) to reduce lodging losses from Dectes stem borers while maintaining yield potential under irrigated and non-irrigated soybean production. This research was conducted at the University of Delaware’s Warrington Farm and was funded by the Delaware Soybean Board.

Related research funded by the Delaware Soybean Board: